Andy Cohen has been to Houston just twice. The first time was in 2010, when he served as the celebrity grand marshal at Houston Pride. “I had a great time. The spirit of the city was great, and I was surprised at how huge the Pride parade was,” Cohen tells OutSmart.

Cohen’s second visit to Houston was for the birth of his goddaughter. And it’s somewhat surprising he hasn’t been to Space City more often, considering that Bravo (the channel that’s synonymous with his celebrity status) has produced at least two shows set in the Lone Star State: The Real Housewives of Dallas and Married to Medicine: Houston.

When asked which of the rival Texas cities he prefers, Cohen deftly navigates the inquiry like the savvy star he’s become: “I honestly haven’t spent too much time in either one, so I will have to tell you after our shows there,” he says.

“It is really a fun show,” Cohen says. “We have video clips we share, and stories that we tell about our friendship and lives. There is a question-and-answer portion with the audience that is fun. Then, of course, if there is some big story or event that happens—like if Anderson interviews Trump—we incorporate talking about that. The show is not political, though. It’s an entertaining evening.” 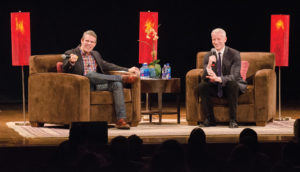 Cohen and Cooper have been friends for most of their adult careers. They met in the ’90s when they were set up on a blind date. “He thought I was too enthusiastic over the phone,” Cohen admits. “He said I gesticulated too much, and he wasn’t interested.”

But they eventually struck up a friendship. “We had a mutual friend [and] wound up going on vacation with [him], [so we became] travel buddies. Our friendship sort of grew from that.”

Both have enviable careers. Cooper is one of the most respected journalists on TV, appearing on both 60 Minutes and his own CNN show, Anderson Cooper 360°. The journalist, who turned 50 in June, has been out publicly since 2012 and is among the nation’s most prominent gay personalities.

Cooper’s journalism career began after he graduated from Yale University in 1989. Although he’s the son of New York socialite Gloria Vanderbilt, he didn’t rest on his laurels. After college, he spent several years as a field journalist in war-torn regions throughout the world, including Rwanda. And he still covers CNN’s major stories on location.

“The only time we had to cancel one of our shows—because Anderson got pulled away for a major breaking news story—was back in 2015, during the Paris [terrorist] attacks,” Cohen says.

“[Anderson] was interviewing me for my second book a few years ago, and someone suggested that we go on tour, similar to what Bill O’Reilly and Dennis Miller had been doing for years,” Cohen says. “That is how we got the idea.”

Cohen, 49, was born in St. Louis and graduated from Boston University. After college, he went on to work at CBS as a producer. In 2004, he rose to prominence at Bravo, winning several awards as producer of Top Chef and Project Runway. But he’s probably best known for Bravo’s popular Real Housewives franchise, for which he still serves as executive producer.

While Cohen was head of development at Bravo, he assumed the on-camera role of “reunion moderator” back in the early days of his myriad hit shows. This evolved into his own nightly series, Watch What Happens Live!, where he currently serves as the only openly gay late-night talk-show host on TV.

Unlike Cooper, Cohen (who enjoyed the benefit of an early career behind the camera) says he has always been out at work. “[Being out] was never even a question for me. It was part of who I was. I was just always myself, and my mother always told me to be who I was.”

Both Cooper and Cohen wear many hats in their professional lives. Cohen has a radio show, in addition to having authored three memoirs. Recently, he developed his own publishing branch that will produce works by other authors. “There will be an announcement coming out very soon about our first book. But it is nonfiction. I look for books that are basically [about] anything that would interest me.”

Cooper is an author in his own right, and recently published A Mother’s Story with Vanderbilt. The book chronicles their relationship and the tragic suicide of his brother in 1988.

AC2 focuses on Cohen and Cooper’s professional and personal lives. Although they have a rough idea of the topics they’ll cover and the stories they’ll share, each show has a wild-card element arising from audience questions. “One time, an audience member asked me how big my dick is,” Cohen says. “That was probably one of the most surprising moments. I answered, but Anderson did not.

“You can ask me how big my dick is,” Cohen adds. “The answer is the same thing I told [the audience]—I am very happy with it, and I have had zero complaints.”

It’s comments like these that highlight the dramatic contrast between the two men. Cohen is a bombastic extrovert, and that’s reflected in his social media posts. He’s always ready with a quip or opinion, even if it’s political.

“[Anderson] is a journalist. I am not. We have a completely different approach to things,” Cohen says.

You can catch the awkward but palpable chemistry between the two out powerhouses when they come to Sugar Land—Houston’s far-flung suburb that prompted Cohen to ask, “How far away is that from downtown?”•