Gay playwright Ike Holter’s Sender, opening Thursday, Oct. 19 at downtown Houston’s Rec Room, takes a pressure-cooked look into what it means to be a millennial in your 20s or early 3os.

Holter, the recipient of this year’s Windham-Campbell Literature Prize for drama, is openly gay, but his stories reach beyond personal experience.

No stranger to gritty new works, Holter’s Hit the Wall (about the Stonewall Rebellion) received an off-Broadway run in New York City. His other works—Vigilante, Servant, B-Side Studio, and Exit Strategy—have been staged primarily in Chicago. Rec Room, however, is producing the regional premiere of Sender. 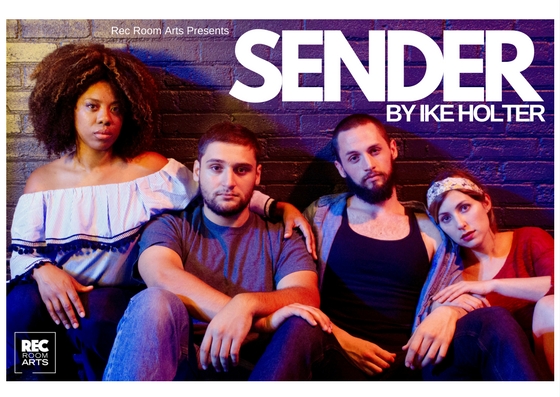 Enter estranged, more-than-a-friend-but-less-than-a-brother, Jordan (Gabriel Regojo) and girlfriend-turned-pregnant-wife Cassandra (Candice D’Meza), and it becomes very clear, very quickly that Lynx’s return home is just as dangerous as being gone. Reappearing doesn’t mean life ever goes back to what it once was. It can’t. But maybe, just maybe…everyone could join him in disappearing from reality, debt, responsibilities, and social media?

The script revolves tightly around the complicated relationships of these four friends and lovers as they try to unpack the past and negotiate the future. But candor and clarity are not always synonymous, especially in the triangular interactions of Jordan, Tess, and Lynx. Without giving away too much, the conflict erupts as drinks are poured, old mixtapes reclaimed, and all the yearnings and pain of the past year are dug up. And Holter is completely fearless in how they do it. His characters spin and spin out of control before our eyes. Things are even more complicated when friends-turned-lovers give way to profanity, nudity. To that extent, the play may not be appropriate for younger audiences.

Holter’s 90-minute script is fast-paced and razor-sharp and captures what it means to yearn for connection.