These treats are just the trick.

For some people (this author included), the most wonderful time of the year occurs not in December, but in the weeks preceding Halloween. Decorations? Up by October 1. Costume? Oh, please, I’ve got several. Candy? At least seven types on hand.

But even if All Hallow’s Eve isn’t your favorite holiday, get in the spirit (hah!) with some ghoulish grub that ventures beyond the usual saccharine baked goods with orange frosting. Houston is home to plenty of establishments offering “scary” dishes that promise a more sophisticated Halloween dining experience.

Those looking to enjoy a dark dinner, literally, should head to Mein Restaurant for their fried black rice infused with squid ink and garnished with peppery sausage, scallions, and a sunny egg yolk. A similarly flavored dish can be found at North Italia, whose squid-ink Mafaldine lets in some light via white shrimp and calamari. If you prefer to prepare your own black cephalopod carbohydrates for Halloween, Central Market has easy-to-cook squid-ink fettucine. 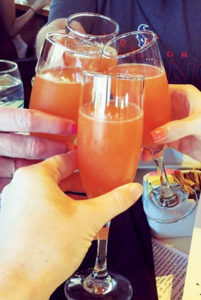 In the same vein (attention, vampires!) of themed hues, blood-red fare is also abundant in H-town. For sanguine sips, head to Benjy’s or Backstreet Cafe for their blood-orange mimosas. Maison Burdisso has you covered when it comes to scarlet sweets with their blood-orange macarons. Looking for non-abstract hematological dishes—i.e., real blood? Stop in at the British Isles Shop for some blood pudding. Or, if you like it even rawer and redder, head to Brasserie 19 for their bloody-good steak tartare crowned with a quail egg and adorned with frisée.

As an homage to the apparitional aspect of Halloween, try to survive eating one of the many culinary creations involving ghost peppers designed by Houston’s more sadistic chefs such as Jay Hengtgen at the Little Bitty Burger Barn. His Charlie’s Five-Alarm Burger is a mouth-searing masterpiece stacked with six freshly sliced jalapeños, six freshly sliced habaneros, and “Nitro Sauce,” which combines ghost chili sauce with arbol peppers, diced dry chilies, crushed red pepper, garlic salt, cayenne pepper, jalapeño salt, liquid capsaicin, and fresh habaneros. This towering inferno of a burger, which registers 10,000,000 (that’s seven zeros—10 million!) on the Scoville unit scale, comes crowned with a fire hat. But bring your pen (and maybe your attorney), because attempting this challenge requires signing a waiver. The creative minds at LA Crawfish are equally enamored with tempting their customers to tackle mouth-burning dishes. In the past, they offered intense ghost-pepper consumption experiences such as the crawfish pho challenge, which required finishing every last deathly-hot drop of a massive 24-inch bowl of pho in under 30 minutes. Those who succeed in draining their bowls are refunded the $21 cost of the challenge and also receive T-shirts that will get them 10 percent off whenever they wear it to the restaurant.

If guts, gore, and skeletons are your thing, Houston’s dining scene is rife with opportunities for not-so-awful offal and bones. The chopped liver at Kenny & Ziggy’s requires no fava beans (but does pair well with a nice chianti), while Taqueria Tacambaro’s mollejas tacos stuffed with sweetbreads (think thymus gland, not toast with jam) are so popular that they often sell out early. Following their September transition to a “Romance Languages” concept, One Fifth Houston now offers a Bolognese secondi that is probably nothing like your nonna’s, because it’s flavored with duck heart. Finally, it’s hard to pick a bone with James Beard-nominee Hori Horiuchi for providing consistently excellent food at Kata Robata, and this month I’ll be eagerly relishing in his unctuous miso-crusted marrow dusted with pickled mustard seeds, onions, panko, red miso, and bonito flakes.