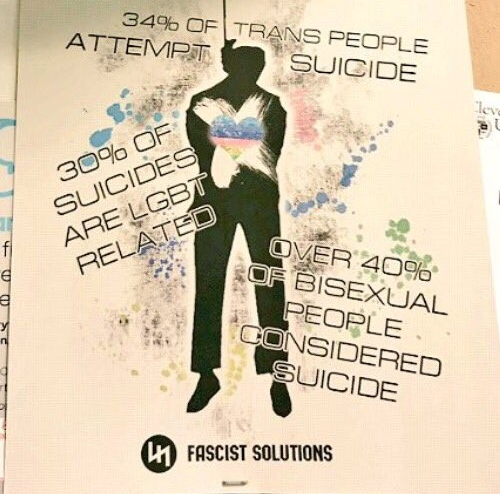 CLEVELAND — Cleveland State University says it will create an advisory committee and offer more sensitivity training after officials were criticized for their response to a flier that urged LGBT students to kill themselves.

The school said Friday in a statement that its initial response had been “inadequate” and left students and staff feeling “unsafe, unheard and unvalued.”

“Hate has no place in our community. It never will,” the statement said. “We unwaveringly value our marginalized students, faculty and staff.”

The flier appeared on a bulletin board Oct. 12, the same day a new LGBT center opened on campus. It urged LGBT students to “follow” those who had killed themselves and showed a silhouette of a man hanging from a noose. It contained a gay slur.

A Houston resident found a similar flier earlier this year at a Montrose bus station.

The flier was taken down, but officials said at the time it would have been allowed to stay if the unknown people behind it had followed school posting procedures.

“We will continue to protect free speech to ensure all voices may be heard and to promote a civil discourse where educational growth is the desired result,” Berkman said at the time.

The school’s response angered students and provoked protests, petitions, and a tense, crowded town hall meeting where students spoke about LGBTQ people they knew who took their own lives.

Peter Sherman, a 23-year-old gay Cleveland State theater major, says he participated in the protests and town hall session because he believes the school should ban fliers urging students to kill themselves.

“People are free to believe whatever they want, but free speech doesn’t protect incitements to violence,” Sherman told The Associated Press on Friday. “Asking people to commit suicide is an incitement to violence.”

The controversy comes as universities across the country struggle to balance concerns over freedom of speech while ensuring campus safety following a violent white nationalist rally in Charlottesville, Virginia. Officials at Case Western Reserve University in Cleveland said Thursday that such fliers would be prohibited on their campus and should be considered a violent threat against students.

Mike Brickner, policy director at the Ohio chapter of the American Civil Liberties Union, said the flier should be considered protected speech because it didn’t target specific individuals, but that it raised novel questions about the legality of speech that encourages suicide. Brickner said it echoed the controversial case of Michelle Carter, a Massachusetts woman convicted of involuntary manslaughter in August after she sent her boyfriend text messages urging him to kill himself.

“That has opened up a dangerous concept. We start to walk down the path of criminalizing speech in that way,” Brickner said. “It’s a question courts may continue to grapple with.”

The debate has left many students feeling torn. School newspaper editor Katie Hobbins, 22, says that as a journalist, she sympathizes with free speech advocates, but that as a bisexual woman, she feels threatened.

“Because it is a first amendment issue, they can’t take that down, but it also pains me that there’s nothing the universities can do on that matter,” Hobbins said.