Gay meteorologist Frank Billingsley went looking for his biological parents. You’ll be surprised at what he found.

For 22 years, KPRC-TV chief meteorologist Frank Billingsley has amassed fans while sharing good news and bad with Houstonians regarding our unpredictable weather.

Billingsley’s calm, gentle, reassuring demeanor helped millions of us through the fallout of Tropical Storm Allison and the widespread devastation of Hurricane Harvey. We needed him. 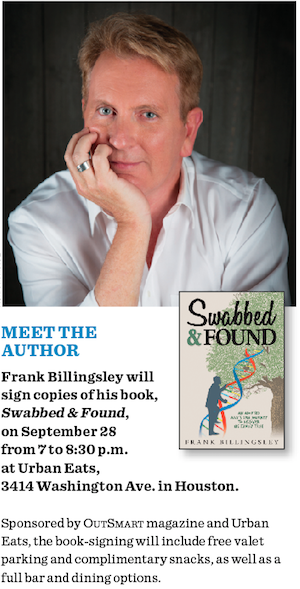 And who can forget that it was Billingsley who spent six hours in a chopper flying over Galveston to relieve our fears after Hurricane Ike? He even helped determine the condition of individual homes for distressed call-in viewers—live, on the air. He was not only a meteorologist that day, but a caring, compassionate member of our “Houston family.”

Can a human being really be so nice?

A tall, handsome man with sparkling blue eyes, blonde-ish hair, and a quick wit, Billingsley could easily have become just another celebrity douche bag, stewing in rancid memories of childhood injustices and abandonment. He is anything but, and he has a new book to prove it.

Even for those who were not adopted, the author’s emotional generosity makes Swabbed and Found a page-turner, complete with entertaining chapter titles (such as “My Walk-in Closet” and “Numb and Numb-er.”)

Born in 1960 in Arkansas and reared in Alabama, Billingsley says his salt-of-the-earth adoptive parents, Jim and Pat Billingsley, never made his adoption a secret.

Several times he posed the question: “Mom, what would I be like if I were your real son?” Pat Billingsley always gave the same answer. “Not as good,” she would say. “Not as good.”

Still, it was difficult. Adopted children often see themselves as different and feel the need to be perfect to earn their place in the family. Billingsley faced a double-edged sword. As he grew older, he started to feel different in other ways—feelings he resisted.

“I was busy being the best all-round boy,” he says. “Being gay was an added element, for sure. People who don’t understand that being gay is biological, and not a choice, sometimes turn to parenting as the explanation. I didn’t want my parents to go through that. I think that’s why I didn’t come out to them until I was 27 years old.”

The image of a pretty mom and an athletic dad sustained Billingsley for years—until it didn’t. In 2013, his dear friend and coworker Dominque Sachse shared a story about an adopted man who found his biological parents through DNA testing. The pilot light was lit.

Soon after, Billingsley took the first swab of the inside of his cheek and sent it off to a DNA matching service. He also started to learn all he could about DNA—the 23 pairs of chromosomes that serve as a genetic map of every human being.

Results from the testing trickled in, often leaving Billingsley with many questions. Still, it was more information than he had previously, and dead-end rabbit holes didn’t deter him.

The handsome weatherman has been in a relationship with the love of his life, Kevin Gilliard, since 1995. One of my favorite chapters in Swabbed and Found is “Aisle Be There.” It’s the story of the couple’s wedding in New York in 2012. “We like to think we put the ‘Man’ in Manhattan,” Billingsley says.

Again, the author writes with beautiful honestly about the joy of that event, beginning with the start of the couple’s relationship and their journey to a marriage that they were never certain would happen in the U.S.

I won’t reveal the outcome of Billingsley’s search for his genetic background, other than to say he has identified 17,538 family connections and several ethnicities. I will share some details about his biological mother and his journey to meet her, because it reveals so much about him.

Susan, his biological mother, was 19 and unwed when she gave birth to Billingsley, the result of a one-night stand. After delivering Frank, Susan was encouraged by doctors to “put the birth behind her.” She did just that.

When Billingsley finally found her, she was living in Arkansas and married to a man who knew nothing about him. The couple had no children.

Susan was also a rigidly religious Christian, a Tea Party patriot, and an Obama “birther.” Susan’s biological sister described her as “a person without a liberal bone in her body, who tends to judge others.” It was not the portrait of a woman who would likely embrace a long-lost gay son.

As one would guess, Susan was not happy to hear from Billingsley when he first called her. But he gently persisted in trying to meet, which must have taken courage.

He also learned something of his birth mother’s own challenges during his search. Susan’s life had been riddled with hardship, poverty, abandonment, cruelty, and loss. She, too, was born out of wedlock, but was eventually abandoned by her family as a “bastard.”

Billingsley, accompanied by Guillard, finally met Susan in the Little Rock airport. Having watched KPRC’s coverage of Billingsley’s wedding online, she already knew he was gay.

“At least I didn’t have to come out to a family for a second time,” he says with a smile.

The meeting was warm and welcomed, and the three of them embraced in long hugs. Susan has Billingsley’s sparking blue eyes, and a heart that was clearly full of longing and love for him.

After a gracious lunch and honest conversation, Susan took Billingsley’s hand. “I’m worried about when we die,” she said, looking into his face. “I will go to heaven and you will go to hell. That’s what the Bible says, and I don’t want to lose you again.”

Did Billingsley throw something at the woman who had abandoned him 50-plus years earlier? He considered it. Then he remembered that Susan’s life had been rife with loss. He chose to look at her through the prism of the traumas she had endured. It was an act of unbelievable compassion.

Today, Billingsley enjoys a warm relationship with Susan. He says that moment of hurt—as well as his years of searching—were both worth it.

What did he learn from it all?

“I learned that most of us are related,” he says. “I learned that we share 99.5 percent of our DNA. I think that if everyone realized how connected we all are—that we are all related—we would be a lot kinder to one another.”

On a journey so life-altering, there were sure to be some disappointments.

“I had to give up my fantasy of being born under a rainbow, the product of two unicorns,” Billingsley says. “If an adopted person enters the search with the thought that he or she might be a Kennedy or a Rockefeller, well, good luck with that.”

And there is one more thing Billingsley learned. He discovered he’s very distantly related to his husband, Kevin Gilliard.

It was destiny after all.

To RSVP for Billingsley’s book-signing hosted by OutSmart magazine on Sept. 28, go here.

Swabbed and Found will launch at Barnes & Noble in the River Oaks Shopping Center on October 7. Visit Frankbillingsley.com for a signed/inscribed copy. The book will be available on Amazon and the Barnes & Noble website October 1. The cost is $24.95.