Noble goal, a little shaky on its feet.

Twenty years ago, producer Li-Kong Hsu introduced the world to a then-unknown Ang Lee with The Wedding Banquet. Now, two decades later, he’s looking to repeat that hat trick with Baby Steps, a comic drama about a Taiwanese-American gay couple navigating the rocky waters of surrogacy, with a Taiwanese tiger-mom meddling all the way. He’s going with a novice again, this time Barney Cheng (best known for a small part in an even smaller Woody Allen movie, Hollywood Ending).

There is a Taiwan connection (Cheng is Taiwanese, Lee was born there), and Cheng is also the writer and director of his film, just as Lee was. The critical difference is that Cheng is an actor. And apparently the temptation to cast himself in the movie, playing one-half of the gay couple, was too much for him to resist. You can’t fault the guy. If there are no roles for you in Hollywood, as the insider mantra says, write your own. But the trifecta of writing, directing, and starring is heavy lifting even for the most talented auteur (at least Tarantino relegates himself to supporting roles), and the movie shows the strain of the weight.

The picture has the common freshman mistakes—far too many scenes, a too-long runtime, uneven camera work (the almost Hitchcockian tilt shot, wildly out of tone), and the occasional painful casting (looking at you, lesbian TSA agent).

But Cheng has an ace in the hole: he was wise enough to put “the Meryl Streep of Asia,” Grace Guei, at its center, though it’s difficult to tell where Guei’s talent begins and Cheng’s direction ends.

Guei plays Cheng’s mother, a woman who will do anything to get a grandchild—anything except to accept the fact that he’s gay. Guei has a mask-marvel of a face, and she can show a tumult of emotion with just a look—something many actors can’t summon during a whole movie. Cheng and his male co-lead (Michael Adam Hamilton) have talent, and in a more seasoned director’s hands, they could probably shine, but they’re just tsunami’d by Guei. She makes one almost overlook the film’s slights.

The film has power, though. The State Department played it during the Obama administration, and shortly after its release, the high court of Taiwan legalized same-sex marriage. Same-sex adoption, however, is still not a thing. Maybe Cheng’s next film will solve that. 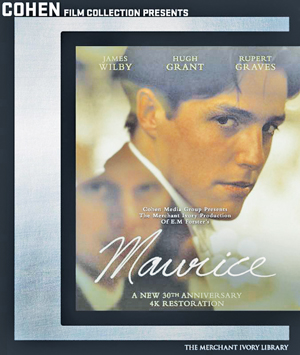 Through the mid-’80s and ’90s there was no greater cinematic powerhouse of Downtown Abbey-style cinema than a Merchant Ivory production. British acting royalty such as Anthony Hopkins and Emma Thompson (Remains of the Day), Julie Christie (Heat and Dust), Maggie Smith, Judi Dench, Vanessa Redgrave, along with a now-retired Daniel Day-Lewis and then-ingenue Helena Bonham Carter (Howard’s End) filled the screen with corset-ruffling, rapacious longing straining against suffocating Edwardian social mores and class disparity. But one of their most affecting works that still stands is Maurice, now released on home video for its 30th anniversary. Groundbreaking at the time, Maurice still packs a deeply emotional punch, thanks to dedicated performances by James Wilby as the titular coming-into-his-own gay hero, a baby-faced Hugh Grant as his more cautious love interest, and Rupert Graves as the seductive servant Alec Sudder. Originally released in 1987, the world was not yet ready for such an in-your-face gay romance, no matter how repressed its characters were, which makes its 21st-century release all the more important. A must for your gay canon.