An event every week that begins at 7:30 pm on Thursday, Friday and Saturday, repeating indefinitely

An event every week that begins at 3:00 pm on Sunday, repeating indefinitely 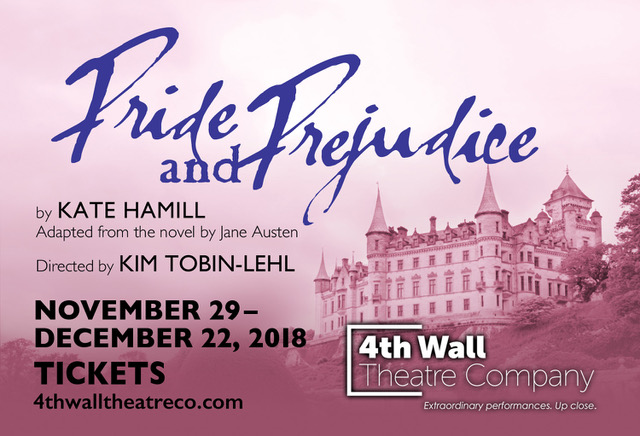 This holiday season brings the Houston premiere of one of America’s most-produced playwrights, the talented Kate Hamill and her raucous adaptation of Jane Austen’s PRIDE AND PREJUDICE. Hamill penned the Off-Broadway smash adaptation of SENSE AND SENSIBILITY that ran for nearly a year at BEDLAM Theatre in NYC to rave reviews. In PRIDE AND PREJUDICE, eight actors bring Austen’s most famous literary classic to life in a rollicking, festive evening of pure theatricality.

The classic story is that of the outspoken Elizabeth Bennet, who faces mounting pressure from her status-conscious mother to secure a suitable marriage. But is marriage suitable for a woman of Elizabeth’s intelligence and independence? Especially when the irritating, aloof, self-involved, tall, vaguely handsome, mildly amusing, and impossibly aristocratic Mr. Darcy keeps popping up at every turn?

4th Wall Theatre Company’s production of “Pride and Prejudice” is generously sponsored by The Liberty Group. It will run November 29 – December 22, 2018, at Studio 101, Spring Street Studios, 1824 Spring Street, Houston, TX 77007. Shows run at 7:30pm on Thursdays through Saturdays and at 3:00pm on Sundays. Tickets run from $17 to $53, with a Pay-What-You-Can performance Monday, December 17. There will be cast talkbacks following the Sunday matinees on December 9 and December 16. The play contains some adult language and themes.

Tickets are available on 4th Wall’s website, www.4thwalltheatreco.com for $17-$53.