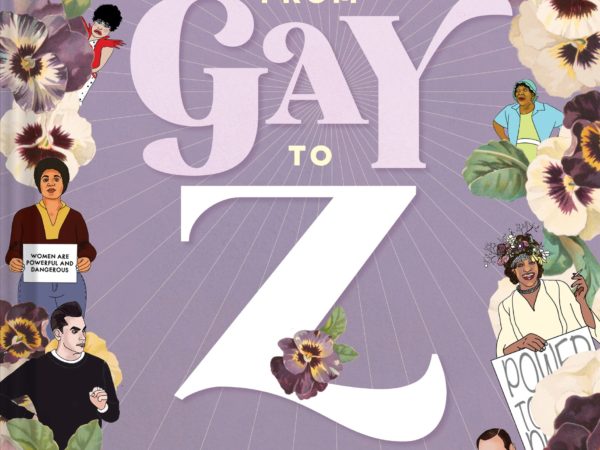 A tiny kiss, a love note written on a scrap of paper, you know how you cherish those things. If you can keep them in your pocket, on a keychain, or tucked in a satchel, all the better because importance isn’t measured by volume. Little things mean a lot, and in the new book “From Gay to Z” by Justin Elizabeth Sayre, they all add up perfectly.

For most of your life, you’ve been fed a steady diet of history, but what do you know about gay history, pop culture, and stand-out activists? Everything you don’t know about your GayBCs is in tiny entries in this book.

Take, for instance, drag, a method of performance that Sayre thinks “queer people have always participated in…” Drag is performance, but it’s also campy theatre, “empowerment,” and “a chance to… get to be the person you always wanted to be.” Check out this entry, and the one for RuPaul.

In your GayBCs are places to meet, dance, play, vacation, and a lot of New York and San Francisco hotspots, both current and otherwise. “So much of New York is gone,” says Sayre, and some are immortalized here.

And by the way, do you speak Polari?

Inside this book, you’ll read about trailblazers like Christine Jorgensen, controversy-makers like Robert Mapplethorpe and Chelsea Manning, activists like Marsha P. Johnson, and the male We’wha of the Zuni tribe, who lived as “female-bodied people.”

You’ll find notable performers from then and now in this book; for instance, do you know who Wayland Flowers was, and his sidekick, Madame? If so, you’ll enjoy the entry for Liberace, too – and if you’re not, then read about Lil Nas X, Billy Porter, Brandi Carlisle, Freddie Mercury, and dozens of LGBTQ allies and “icons.”You’ll also find entries about notable LGBTQ-owned newspapers, as well as authors, playwrights, movies, and moviemakers…

In the introduction for “From Gay to Z,” author Justin Elizabeth Sayres says that there was no way “of boiling down the entirety of queer culture into one book.” It’s true: just page through and you’ll likely spot AWOL entries almost immediately. (What? No Danica Roem? No Bettie Page?) No worries: you’ll also instantly see something else that Sayres promises: lighthearted humor.

There’s so much goodness packed between the covers of “From Gay to Z” that you almost don’t know where to start. Be conventional, and begin with “A” or take a chance and flip open the book at random. There’s something interesting, either way. Sayres goes pretty far back into gay history for the entries chosen, but there’s plenty for a modern reader, or for someone who’s recently out, or who badly needs a brush-up on history. Each entry is quick to read, too, so no commitment is required.

Even so, this book is like a bag of potato chips: you can’t help but dip into “From Gay to Z” until it’s gone. Little things mean a lot but in this case, they also mean great big fun.