The chorus of “93 ’til Infinity,” the breakout hit from that debut album released in 1993 by the West Coast hip hop artists Souls of Mischief, inspired the creation of the 93 Til record bar and lounge in Houston. Founded by California chefs Gary Ly and Lung Ly (no relation), the restaurant and bar occupies the former Montrose home of Night Heron.

“My family and I moved from California to Conroe in 1993,” says Lung. “So the song has a special meaning to me, and it just seemed to fit the vibe I wanted here.”

Opened in late 2020, Lung had a rough time dealing with the pandemic and waiting for the liquor license. He says they just gave away free alcohol, beer, and wine. “But that wasn’t sustainable!” he laughs.

93 Til is the epitome of Tokyo’s record-bar culture, with its Mid Century design and furniture from Austin’s BRWN Collective. The Audio-Technica turntable spits out hip hop, jazz, rap, and funk tunes, among other styles. (The playlist is printed on the menu.) The bar sends out carefully curated craft cocktails and spirits, and the kitchen (now helmed by Lung and chef Jeff Potts, who took over from Gary) creates instant classics such as foie gras, PB&J, and a classic chicken sandwich that may be one of the best fowl sammies in town. It’s topped with slaw, house pickles, and honey mustard on a brioche bun.

“I think the main reason to come is the music and the neighborhood vibe,” Lung says. “But we also have really good food and drinks.”

The dinner and weekend brunch menus are mostly locally sourced, and items change throughout the seasons. But right now, Ly is really liking the beef carpaccio, an Italian-style roast beef rub, horseradish crème fraîche with marinated beech mushrooms and chive oil, and a parmesan crisp.

“We also have a redfish dish from Turtle Creek Aquaculture,” he says. Turtle Creek runs a sustainable fishery in Palacios, Texas, near Matagorda Bay. “It’s so fresh, I think they grab it right out of the pond and bring it to us.”

With a small kitchen space, Lung now leaves most of the cooking to chef Potts and spends most of his time on the management side. 93 Til’s other team member is bar manager Tim Vaughn, who makes a mean version of an Old Fashioned in a smoked glass. “He likes to be creative, and I love watching him play around with drinks,” Lung says. 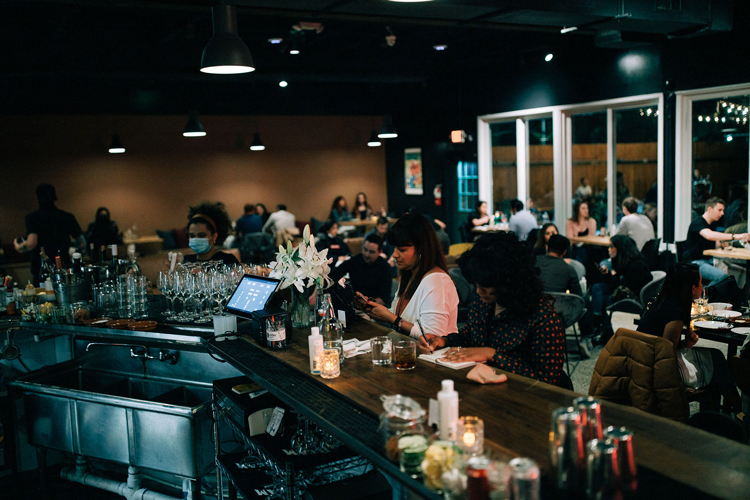 Tuesdays through Fridays from 4:00 to 6:00 p.m., you can enjoy Happy Hours with bar-special bites like flavored popcorns, wings, and deviled eggs, all under $10. Cocktail specials are $8, and beers are $4. Brunch, which is served Saturdays and Sundays from 11:00 a.m. to 3:00 p.m., features a spicy chicken pozolé, a huge hangover burrito, churro French toast and, of course, the traditional biscuit and gravy with eggs your way.

But food and drink aside, 93 Til is a great place to just, as the song says, chill. “Honestly, I just think 93 Til is a cool place to hang out,” says Lung. “When we started off it was a lot of the young dating crowd, but now it’s all walks of people, and we have real neighborhood regulars.”