It was a “meet cute” made for the big screen when David Armendariz and Jesse Gudino met in September of 2015. Jesse was working at Hollywood Video, and David was there shopping. David knew Jesse was the man he wanted to marry as soon as they met. And Jesse recalls that he knew David was “the one” from the moment they eventually had their first kiss.

David’s feelings were confirmed as he learned more about Jesse. “He has strong
family values, is interested in the beauty industry, and wants to have children. He also likes to make everyone around him happy,” David explains.

David and Jesse are both Houston natives who now live in the First Ward. “We both are first-generation Americans and have had a business together for eight years now,” says Jesse, who co-owns Houston’s Studio A Salon with David. Hard to argue about a love that works at home and in the office.

Although the couple was ready to wed in 2020, they were forced to postpone their wedding three times because of the pandemic. Then they decided to forgo a traditional wedding altogether. “We decided to take advantage of the small window of travel last summer and elope in Spain—one of our favorite countries,” Jesse explains. 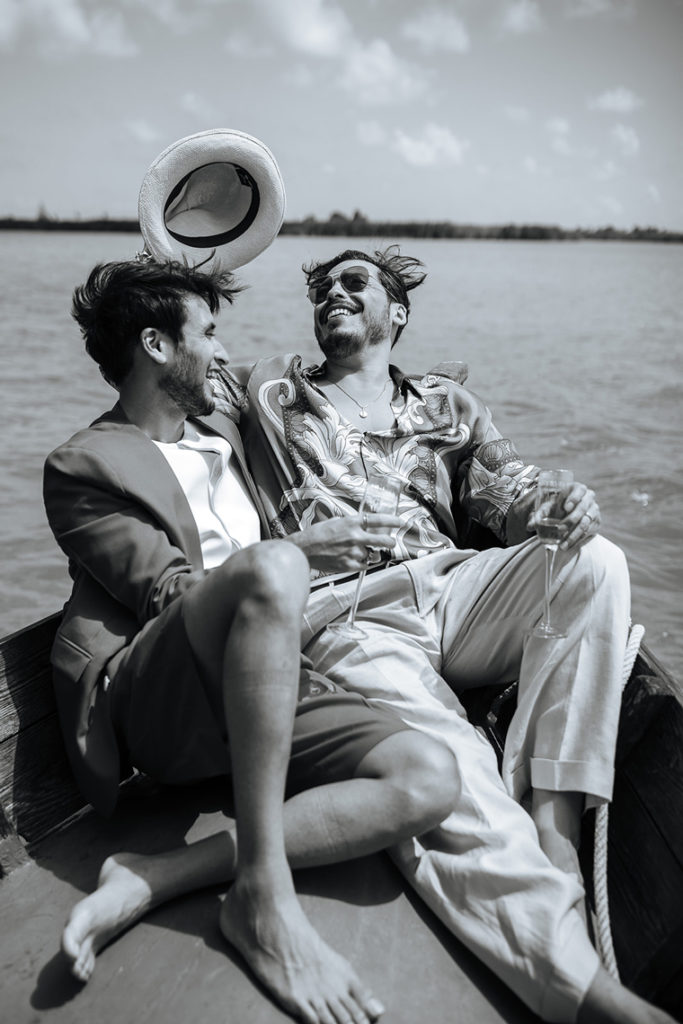 Jesse, 28, went to San Jacinto College for his cosmetology training, and also studied art at the Glassell School of Art. David, 41, who went to the University of Houston Moores School of Music to study music and dance, is the founder and co-owner of Studio A Salon.

Of course, such a fairy-tale meeting needed to be followed by an equally romantic proposal. That happened on July 28, 2020, when David proposed to Jesse on a hike in Zion National Park. David got down on one knee on a tall rock, pretending it was a photo-op, and told Jesse he was ready to spend the rest of his life with him. Jesse was completely taken aback, and tears filled his eyes immediately.

Interestingly, that magical moment was just the first of three national-park visits for the couple. “Our engagement, engagement shoot, and wedding were all in national parks,” David notes.

The pair eloped on July 28, 2021, to El Pico de Águila in Yátova, a Spanish mountaintop near Valencia. But they still wanted to support their LGBTQ community even a continent away from home, so they searched on Google and found photographer Joy Zamora and a few other gay-friendly vendors. “We found Joy and fell in love with his work,” Jesse says.

Then, with the help of a wedding planner, they crafted a romantic adventure in Spain to honor their union. “Our elopement started with us bathing in an old palace marble tub, strolling through the city of Valencia dressed in Versace and Fendi, and then riding a boat across a local lake while indulging in Valencian paella,” Jesse recalls. “We finished our day on a secluded mountain at sunset. This is where we said our vows dressed in McQueen. We ate a traditional Spanish picnic and had a local Flamenco group dance and serenade us. Mind you, our excellent wedding planner Lorena, of Eventos Clandestine, had all of this coordinated in one week.”

There was one moment in particular at their wedding that the couple says will stay with them forever. “The Spanish guitarist [playing in] the crisp mountain air was unforgettable. So romantic. And we planted a tree for our recently lost dog, Darla, in the same place where we married,” David adds.

Because they eloped, the romantic pair decided not to have an officiant. “We wrote our vows and said them to each other,” David says. To make it legal, they will go to the county courthouse in Houston to be married by a judge.

Because they love the Greek island of Mykonos and its beaches, David and Jesse decided to honeymoon there.

The couple is filled with kind words about one another, as should be the case in any sweeping love story. “Jesse is a kind soul. He loves to make people feel special and happy. I see it every day in how he treats his clients and staff,” David says. Jesse continues by explaining what makes David so special. “He comes from a family of ten and treats his salon company like they are family, as well. He is kind and loyal, and wants to be a part of his community.”