Food unites people, according to queer Houston couple Lovie Olivia and Preetika Rajgariah. Since they first met eight years ago, the two visual artists—who are both vegetarian and come from vastly different economic and cultural backgrounds—have used communal dining experiences as a means to spark socio-political conversations.

In hopes of sharing their colorful, plant-based recipes, and to create similar conversational experiences for others, the pair launched Two Dykes and a Knife (TDAAK) in 2017.

Their initial goal was to place dinner tables inside of art galleries and museums so guests could participate in planned dinner dialogue. Two years later, their first dinner was held at the non-traditional Jonathan Hopson art gallery located in the heart of Montrose.

The couple’s next two dinners were scheduled for mid-2020 in New York and Chicago, but COVID-19 intervened in those plans. “Because the pandemic was [still] in full force, we ran a different idea by the Galveston Artist Residency, and they thought it was interesting,” Rajgariah says. With funding from the Galveston program, the couple escaped their quarantine isolation for 25 days in August and September and traveled 5,500 miles across seven states to “document our journey living off of the land, foraging different spices, cooking, and eating food,” Olivia explains.

The journey was not an easy one, Rajgariah adds. “It was apocalyptic. There were fires, droughts, hurricanes [happening across the country].” But an interesting project came from the road trip nonetheless. In June, the couple will release a recipe book that chronicles their experience as Black and Brown queer women voyaging across the country to live off the land during a pandemic.

More good news came to Olivia and Rajgariah in late 2020 when they bought their first house. Their new backyard soon became a safe place to offer socially-distant group dinners.

Their latest al fresco event, a collaboration with Houston-based arts programmer DiverseWorks, featured six guests spaced six feet apart and eating a six-course feast. “Each time we gave a course out, people were left with a prompt to discuss—typically something related to food, [such as] food memories, food sustainability, and food access,” Rajgariah says. Despite the attendees not knowing each other beforehand, “they ended up sharing, connecting, and leaving as friends.”

On April 10, DiverseWorks, which is currently highlighting Two Dykes and a Knife as part of their Visionary Futures series, will stream Equi/Table, a mini-documentary on YouTube that captured Olivia and Rajgariah’s most recent dining event and the conversations had around culture, sustenance, and the future. The ongoing Visionary Futures series explores questions about the future through the lens of queer and nonbinary artists of color.

As an interdisciplinary artist, Olivia has created paintings, sculptures, and art installations in the Bayou City for the past 25 years. “My work explores themes of race, gender, power, and sexuality,” she says. “It’s a bit of activism and a lot of history, pulling inspiration from other queer African American women such as Audre Lorde and Edna Lewis. I use those influences in food-making as well.” Her work is currently being showcased in three art shows.

Olivia’s understanding of food comes from her father, a Louisiana native who always did the cooking in their house. After becoming a vegetarian five years ago, she learned that she liked to play around with the textures of unique vegetables. Mushrooms are a key component in the TDAAK kitchen, which is evident in several recent dishes such as pulled-mushroom sliders with kohlrabi green-apple slaw and homemade barbeque sauce, mushroom philly cheese steak, and “chicken fried” mushrooms.

Since 2010, Rajgariah, an Indian American visual artist, has used object-making, video installations, and performance art to explore the complexities that arise when cultures intersect. “My artistic practice is about unlearning and decolonizing all that has been infused in me (and other South Asian women) from a young age.” She is also interested in starting conversations about “the commodification of culture,” and her most recent work explores the ways in which the Hindu-rooted practice of yoga has been Westernized.

When Rajgariah moved to Houston from India at age four, she mostly ate her mother’s home-cooked vegetarian Indian food. “Because there was no Indian market at the time, my mom used to make most of her food from scratch—from paneer, to flour, to yogurt. It’s incredible to think about,” Rajgariah says, adding that she has been working on homemade pizza and ice-cream recipes. “I respect my mom more now than I ever did.”

Olivia and Rajgariah started long-distance dating in 2016. Olivia was working in Houston while Rajgariah was attending grad school in Chicago.

“When I was in Illinois, Lovie would send me pics of the stuff she was eating,” Rajgariah recalls. “I was like, ‘Damn, this is beautiful food! Do you have a food account on Instagram?’” 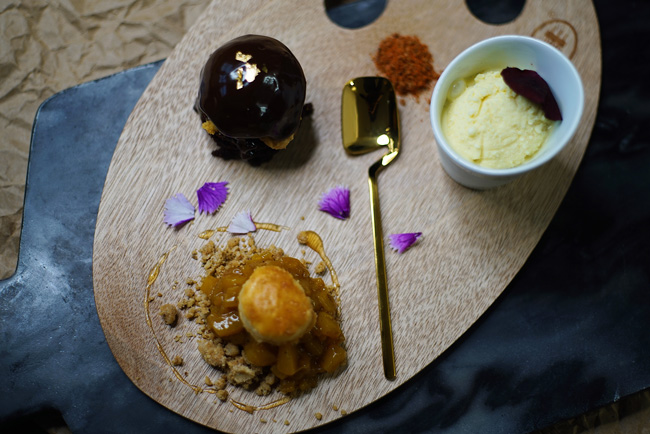 After a few months of posting Olivia’s food on her social media, Rajgariah decided the two should create a food account separate from their art pages. Two Dykes and a Knife was born on Instagram in 2017, with Olivia serving as head chef and Rajgariah assisting as the sous chef.

“We wanted a name that was a bit controversial,” Olivia says. “‘Dyke’ is an old derogatory term in the queer community. We wanted to bring back the word and uplift it in a different light.”

“And the word ‘knife’ also gave us some edge!” Rajgariah laughs.

Following their DiverseWorks video debut and their book launch in June, Olivia and Rajgaria have plans to take their dinner events outside of the city and the state. “As long as there is funding, we want to make it happen,” Rajgariah says. “The dinners are important, and it’s also important that people like us do the cooking and the facilitating of these conversations.”

For more information on Two Dykes and a Knife, visit twodykesandaknife.com. Learn more about Lovie Olivia on her website at lovieolivia.com, and keep up with Preetika Rajgariah on her website at prajgariah.com.