Electronic beats intertwined with dream-like vocals soar through the speakers and swirl around the room. It’s smooth, it’s sexy, it’s Uh Huh Her.

Composed of Camila Grey (lead vocals, keyboards, guitar) and Leisha Hailey (backup vocals, bass, keyboards), Uh Huh Her stepped into the music spotlight in 2007 and shortly thereafter released their first full-length album, Common Reaction. But the band is not the first musical endeavor for either of these ladies—Grey was previously a part of the rock band Mellowdrone and has played bass and keyboards for Dr. Dre, Busta Rhymes, and Kelly Osbourne, while Hailey was part of the ’90s alternative band The Murmurs before she moved on to films and TV. And yes, you might recognize Hailey from her role as everyone’s favorite journalist Alice Pieszecki on The L Word. But if you go to an Uh Huh Her show, don’t be that girl screaming for “Alice.”

The ladies of Uh Huh Her shed their Nettwerk label following Common Reaction and have since released two full-length albums, Nocturnes (2011) and Future Souls (March 2014), independently. The band’s third album also marks the first one that Grey and Hailey have made not only as bandmates, but as a couple living together.

Uh Huh Her embarks on its “Future Souls Tour” April 27 and makes a stop in Houston to play Free Press Summer Fest, the outdoor music festival held in Eleanor Tinsley Park May 31 and June 1. A few weeks before Uh Huh Her left on tour, I had the pleasure of speaking with Camila Grey about being an independent band, the band’s love-hate relationship with The L Word, and their rock ’n’ roll style.

Megan Smith: What do you consider to be the biggest evolution from Common Reaction to Nocturnes to Future Souls?
Camila Grey: Oh gosh, I think just becoming a self-sufficient indie band. That’s been our biggest hurdle, and something that we’ve had to get used to—doing everything kind of on our own. Sonically speaking, I think for this record we’ve gone back to our roots. It’s kind of come full circle. When we made Common Reaction, it was very electronically based—this really slick pop album. We wanted to go back to where we started and where we began, and that really worked for us. That’s kind of always where my heart has been. Did you and Leisha write most of the songs on Future Souls together or separately?
We did a lot separately. I wrote three or four on my own. There was also a lot of collaboration with other artists as well. We worked with a guy by the name of Che Pope, who I had worked with before with Dr. Dre, and he’s just excellent and an amazing beat maker. He did the Miseducation of Lauryn Hill record. He’s this extremely prolific guy. We did “Nuthin without Your Love” with him. I was also in a band called Big Black Delta, and we worked with them on “Fine Lines White Lies,” which is another track on the album. We really chose to open up the doors to other people coming in, and getting input on this album, for sure.

This is the second album you’ve done without a record label. What’s the best and worst part about doing things independently?
The best part is creative control, always. First and foremost, having people in your ear [telling you] what they think you should be doing is really hard—especially as an artist, because we’re so sensitive about that kind of stuff. The worst part is the lack of marketing and the lack of financing behind marketing. I think that’s one of the things most indie bands miss. Social media can only go so far. You do certainly miss getting written up, all the television, and all that kind of stuff. That’s the tricky part. And of course, we miss the tour support. AmEx finances most of our tours these days, so they’re like our label. [Laughs]

You both have musical experience prior to Uh Huh Her. Do you still see experiences from those past projects influencing your work today?
The road leading to this moment is always influential, so, you know, you take your past experiences and learn from them and take what you will from those experiences. I think that you learn a lifestyle from being on the road and touring with other artists, so it influences how you act on your own tours. And it helps, because you know what to expect.

What would you say is the most personal song on the album for you?
Probably “Strange Design.” I wrote that one. We have a home studio, a room we built just for writing, and I was in there [when I wrote it]. I was sick with a cold, and I’d taken a lot of NyQuil. [Laughs] I was, like, in another world, and I was like, “I’m going to write something weird, something dreamy,” and that song came out.

You and Leisha have been bandmates for many years now, but this is the first album you’ve made as a couple living together. How has that influenced the way you work together and make music?
I wouldn’t say it’s difficult, it’s just tricky, because I’m this weird control freak. I produced the album, so it’s super-precious [to me], sometimes too much so. So I think we have to differentiate between having a band fight and having a couple fight and just knowing the difference between the two. Like, “This is your bandmate talking, not your girlfriend. So you can’t get mad at me as my girlfriend, you can only get mad at me as a bandmate.” It’s learning how to wade those waters, for sure. You kind of have to have a split personality. [Laughs]

I know that previously fans would come to see The L Word’s Alice Pieszecki, not Uh Huh Her. Do you feel like that’s changing as the band puts out more and more music?
It’s funny you should ask that, because just yesterday I was on Twitter doing my daily thing of reading all the news, and the World Cafe Live, which we’re playing in Philadelphia, was advertising us as “Come see Alice rock out with her band.” I got so pissed, and I was like, “Are you serious? Oh no you didn’t. If you want, we can bring a projector and play the show while we’re up there, if your patrons would like that.” I was being a dick, but [sighs] you know it is still happening, and I don’t think it’ll go away. [The L Word has] a rabid fan base, and she’s an amazing person and an amazing character. There are certainly the hardcore fans of the music, and there are still the hardcore fans of The L Word, and I don’t think that’s something we can escape. I think I would have to quit the band and start a totally new project to ever escape that. And it does kind of bum me out, and it bums the drummer out, because we’re there too, and we’re putting our heart and soul into it. When people are shouting for Alice, it does bum us out for sure, because they’re not there for the music, they’re there to see their favorite character. After a while, that does get to you. It’s not a really big problem, but it definitely affects us. And it affects her, too—she doesn’t like it, either.

I saw you play Free Press Summer Fest back in 2010 when the festival was still very young. Are you excited to play the fest again?
Oh, we are so excited. I think we’re a better band, and we’re more used to that kind of thing, where you’re in a festival environment. We’re super-looking forward to it. We love playing outdoors, and it’s always just a really fun time. We’re excited that it’s gotten bigger and it’s been successful.

Outdoor music festivals definitely inspire a certain fashion style, from high-waisted shorts to flower headbands to long, flowing maxi-dresses. How would you two describe your own fashion style?
They’re trying to re-create the ’60s with cell phones instead of joints. [Laughs] [My style] is like the antithesis of fashion. I like kind of a boho-chic look—with a nice fancy boot. Leisha’s kind of like a hippie-chic. I’d prefer wearing Dior and Chanel if I could, but I’m a musician.

Are there any other bands in the Free Press lineup that you plan on sticking around to see?
My old guitarist plays for Edward Sharpe and the Magnetic Zeros. Ms. Lauryn Hill is playing, and that would be very exciting [to see]—the Fugees kind of encompass my whole high school experience, listening to [their album] The Score. Good stuff. 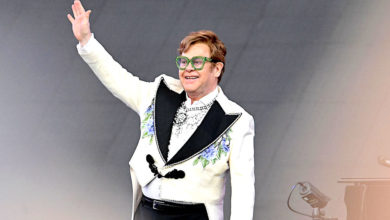