On Saturday night, August 1, a masked gunman entered Cafe Noir, a known gay and lesbian hangout in Tel Aviv, and began a vicious shooting spree. He killed three innocents and wounded 11. The night was supposed to involve a LGBT youth counseling meeting, nothing more. The victims were mainly teenagers and many were in the closet to their families.

While Israel may be in the nexus of the torrid Middle East drama, a hate crime like this is completely unheard of. It’s the first of its kind. Some are even labeling it “the Stonewall of Israel.” On the first day of August, Tel Aviv is usually as spectacular a gay destination as Mykonos or Amsterdam. Sadly, this grotesque attack will bruise the city’s rising credibility.

I spent the last academic year in Israel, studying and volunteering throughout the country. I worked the final three months in the new Tel Aviv GLBT Municipality Center, until the saga came to its fantastic culmination at the Tel Aviv Pride Parade. While I will always be faithful to the beads and bedlam of the Houston Pride parade, Tel Aviv’s 10th Pride celebration was utterly unforgettable. Tens of thousands of tan Israelis marched through the center of the city onto the beach, where, as the house music played, they cleansed themselves in the awesomeness of the Mediterranean Sea. It was beautiful.

The LGBT community of Tel Aviv treated me like family, from the gregarious drag queens to the parade planners who invited me into their homes. The nightlife is one of a kind: on any night, in any packed club, a glitzy party awaits. Unfortunately, this city of shimmering momentum is now obscured by darkness.

But if there is one skill that the Israeli people share, it is the

ability to cope. Rallies have taken place in Jerusalem and Tel Aviv, and Prime Minister Binyamin Netanyahu condemned the hate crime. The LGBT community of Tel Aviv has united to face this tragedy head on. One volunteer writes, “I’ve slept for two hours in the last two days. I’ve been in the [GLBT] center all day, volunteering. It’s really difficult; many people are sad and shocked. Most kids who were present during the attack were in the closet, and now they had to be outed to their parents. some of which responded terribly.” In time, Tel Aviv will be back and more fabulous than ever.

Now, my memories of two sensational Pride parades are tinged with blood. On June 28, the Houston community came together for a perfect night, only to find out later that at the same time an outrageous police attack took place in the Rainbow Lounge in Fort Worth. And the Israelis who marched with bliss on June 12 now must face each night with fear and shame. I suppose the question of whether Pride parades are needed has just been answered. 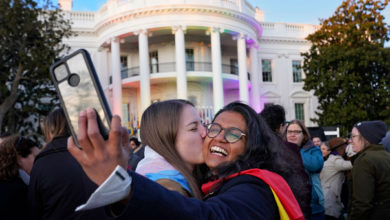