Jason Stuart makes it to the middle. Plus Edward Albee chats with and Kathleen Turner, and hula men.

Jason Stuart is one of those actors who shows up in film and on TV more often than we are aware of. Remember his 1998 portrayal of a young Angelina Jolie’s booker in Gia? Didn’t think so.

Nonetheless, Stuart has been seen in more than 100 of those guest spots, including roles in My Wife & Kids , Everybody Hates Chris, and a number of indie films like 10 Attitudes and Coffee Date. It’s no wonder he now spends little time on the comedy club circuit where he first gained acclaim as the country’s first openly gay guy comedian.

This month Stuart honors his stand-up roots, bringing his rapid-fire act to here! TV. Making It to the Middle not only offers Stuart in all his cocktail-through-the-nose-spraying glory, but also provides a poignant look at the comic as he approaches both the middle of his career as well as the middle of his life.

Airs through April 24 on here! TV.

The April episode of PBS’ In the Life , titled “Challenging Convention,” features a chat between Pulitzer Prize-winning playwright and Houstonian Edward Albee and Kathleen Turner, who starred in the 2005 Broadway revival of his Who’s Afraid of Virginia Woolf? The two discuss censorship, writing gay, and the insouciant commercialization of Broadway—but not a word about that bizarre accent of hers.

Is that pineapple under your skirt or are you just happy to see me? Director Lisette Kaualena Flanary follows Hula master Robert Cazimero and six male high school students as they compete in the traditionally female-dominated Merrie Monarch Hula Festival, aka the Super Bowl of Hula. 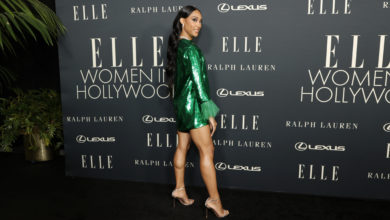